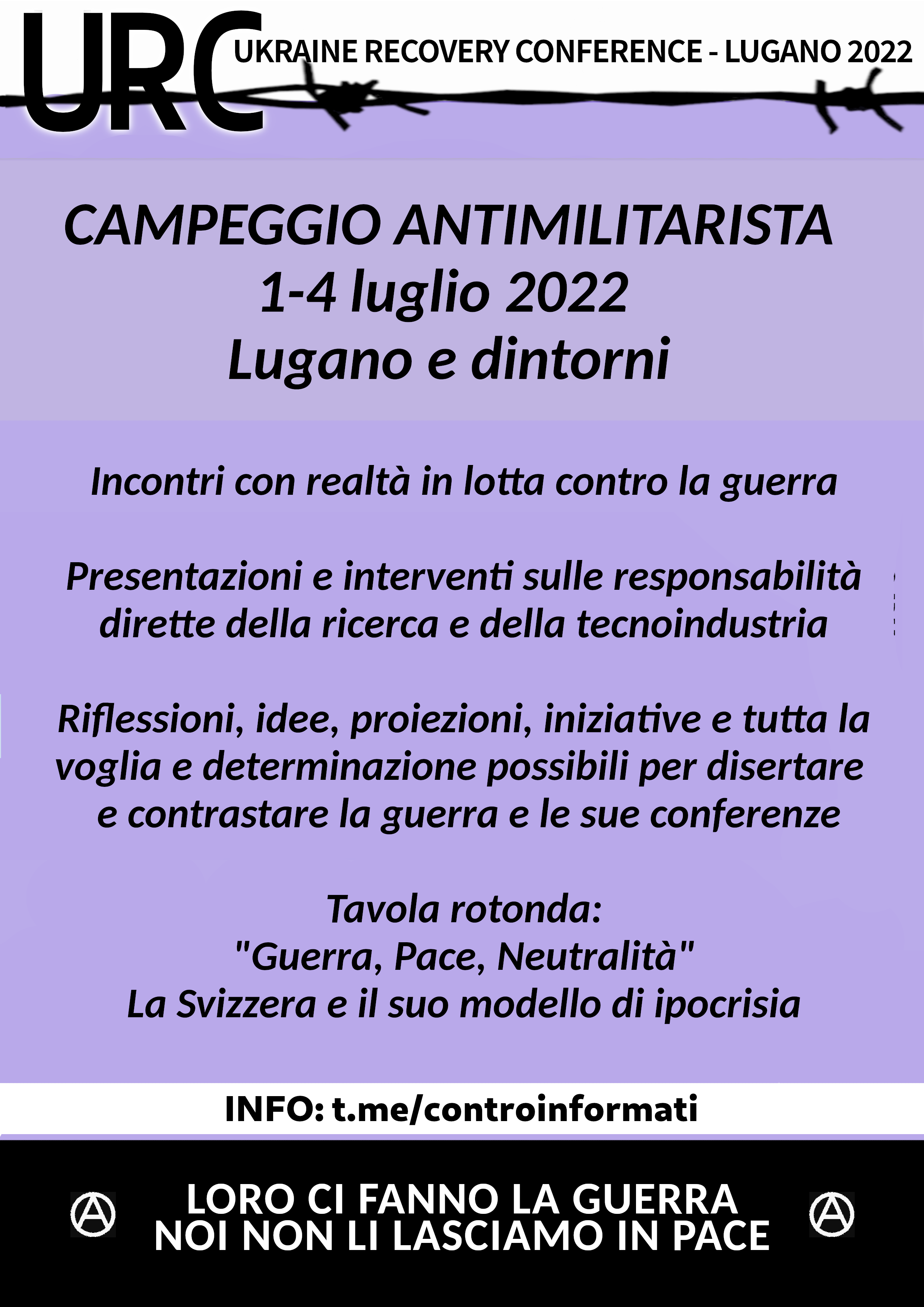 IN LUGANO TO PROFIT ON UKRAINE

On 4 and 5 July, Lugano will be in the spotlight of the whole world. In a completely armored city and with an unprecedented deployment of forces, the so-called “Ukraine Reform Conference” will be held. The Federal Council has called together the most important political and institutional figures on the planet in what will be a full-fledged NATO summit, to decide and plan the political and economic arrangements of the world.

Lugano, the capital of business and partitioning

It’s no surprise that Lugano is gradually becoming the partition center of the capitalist system. An ideal marketplace where business and major meetings can be carried out in total security. In fact, countless “meetings of interest” take place in the city: philosophers of sovereignism, bankers, speculators, merchants, and international organizations regularly meet on the shores of Lake Ceresio – increasingly equipped with a view to congressional and business tourism – to define and structure the trends and direction of the world.

The special relationship between Lugano and the State of Israel is an example that well illustrates this trend. Or again, how to forget the meeting of the Lugano Commodity Trading Association (LCTA), held at Lugano’s LAC on June 23 and 24, which the Committee Against War in Ticino had demanded to cancel, precisely because of the particular interests at play (https://mps-ti.ch/2022/06/no-ai-mercanti-di-materie-primeno-alla-conferenza-internazionale-annuale-della-commodity-trading-association-lcta-del-23-e-24-giugno-a-lugano/). Participants at this conference in 2019 included Marco Borradori (former mayor of Lugano), Normann Gobbi (State Councilor), Sergey Garmorin (plenipotentiary ambassador of the Russian Federation in Switzerland), Tatiana Volozhinskaya (trade representative of the Russian Federation in Switzerland), Marco Passalia (LCTA secretary general and deputy for the PPD in the Grand Council), numerous representatives of companies operating in the gas, oil, and shipping industries, and various presidents, directors and administrators of banks.

War only brings destruction and wealth to the rich!

Switzerland boasts of being a neutral and historically diplomatic country. And yet, with its usual hypocrisy, it has decided to invite 40 heads of state to discuss the so-called ”reconstruction” of Ukraine or, in other words, the development of liberal reforms in the country. In fact, those primarily interested are the financial bodies of international capitalism, which hope to create new opportunities for investment and profits.

Ukraine is a huge source of natural resources, raw materials, and fertile land. It is a great opportunity to line their pockets for those who ravage, plunder, and kill. Hence, it’s no surprise that among the main actors at these meetings we also find the International Monetary Fund, the World Bank, the European Investment Bank and the European Bank for Reconstruction and Development the European Union, NATO and OECD…)

No peace for those who live off war!

In a globalized capitalist system, the only true neutrality is the pursuit of profit at any cost. The pillaging of nature and the slaughter of entire populations are only “side effects” that have little bearing on the budgets of big corporations and the GDP of single states. Considering the ever-increasing global arms trade, the presence of dozens of armed conflicts going on around the world should come as no surprise. Every bomb, grenade, drone sold and every declared war, yields billions.

Benefitting from war, are not only those who design, produce and sell weapons; it also benefits those who need raw materials and cheap labor; those who need places to sell their goods at high prices; those who, like banks, invest in the arms industry; those who are professional soldiers; those who will rebuild what has been bombed; those who hold power and want to increase the prestige and influence of their state.

The dismay probably caused by the geographic proximity of the war in Ukraine (and the fact that it mainly involves white people) should not make us forget that the same European and U.S. governments that now call for peace and preach self-defense for the attacked people, are responsible for dozens of conflicts and hundreds of thousands of deaths worldwide.

For decades these states have been instrumentalizing populations, carrying out land invasions and massacres in the name of watchwords such as “Peace and Democracy,” used to conceal the real goals: neocolonialist political and economic interests and control of resources. And let us not be fooled by the speeches of U.S. and European heads of state: every day of so-called “peace” in the West, outside Europe, bombs and weapons continue to claim victims (Syria, Afghanistan, Iraq, Libya, Palestine, Kurdistan, Niger, Mali, Yemen, Somalia,…). And of course, the idea of arming these people to enable them to self-defend was never even remotely considered.

The war in Ukraine has contributed to generating interests of various kinds, which have caused an intensification of other conflicts already going on around the world. For example, the neo-imperial militaristic invasion operations of the Turkish state targeting the territories of Iraqi Kurdistan in Northern Iraq, or the continuing neo-colonial incursions by the Zionist and segregationist Israeli state into what remains of the territories of Palestine. The common link is found in extractive, energetic, commercial, and strategic interests. Indeed, both in Iraqi Kurdistan, as much as in Israeli-occupied Palestine, there are several sites where gas can be extracted. Erdogan’s regime and the various European states would like to exploit them through a new pipeline (which would supply them with Kurdish and Israeli gas). This would partly solve the gas supply problem that has arisen with the war in Ukraine. This is one of the reasons why the Turkish invasion in Iraqi Kurdistan or the atrocities perpetrated by Israel in Palestine do not bother Europe so much: the foreign policies of states are aimed solely at protecting the strategic interests of big capital.

It remains crucial to avoid falling into simplifications and to oppose wars without lapsing into sterile pacifism, reflecting on what the real causes of this situation are.

States use war against external enemies to consolidate their power and suppress all dissent and social conflict within their borders. They manipulate the exploited classes, which are used as pawns to be sacrificed in the name of a flag.

As aptly stated by some Ukrainian anarchist comrades: ‘’what is happening in Ukraine is an act of imperialist aggression: an aggression that, if successful, would lead to the decline of freedom everywhere-in Ukraine, in Russia and probably in other countries as well. And it would also increase the likelihood of war continuing and turning into a global war’’.

Against all wars, and against an armed peace made up of military bases, subjugation of territories, war industries, nationalist propaganda, and everything that feeds this deadly capitalist system.

To understand what is happening at both a European and global level, we need to understand how and who is moving in the state where we live.

It is necessary to organize more moments to meet, reflect, discuss, develop multiple practices of struggle, and pave the way for an anti-militarist internationalist practice. Recreate and consolidate contacts, exchanges of experiences and perspectives.

We are launching anti-militarist days

in Lugano, from the 1st to the 4th of July

There will be presentations, discussions, a round table

A detailed program will follow soon on sites and channels: 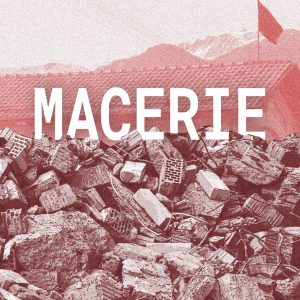